I know I've already mentioned this on the Fair Forum, but as a reminder, no one will be allowed to take pictures in the Hasbro building (except inside the cafeteria). Hasbro will make announcements to everyone (especially during the tours), anyone caught taking pictures will have camera/phone confiscated and will not be allowed back in the building. Hasbro will also need everyone to follow their guides as we walk around and not wander off – again, anyone found wandering will be kicked out and not let back in. They don't want to sound mean, but they have to enforce security since they're a publicly traded company and there are things that are just not ok to have the public find out about too soon.
Posted by Summer at 4:35 PM 1 comment:

After much speculation by collectors, this year's Comic Con Exclusive Pony has been officially revealed! She will be available at this year's San Diego Comic Con for $14.99 and on Hasbro Toyshop.

I don't know about you, but I love her punk meets goth style. She is definitely unique and will be a great addition to the Comic Con ponies! I can't wait for her to join my collection.
Posted by Summer at 9:57 AM 1 comment:

For those who may be blissfully unaware of this new crop of Pony fans, I came across this video by RocketBoom that does a nice job of explaining exactly what it is to be a Brony.

While it is a little odd that there are tons of new male pony fans clamoring over the awesomeness that is Friendship is Magic, as a lifelong My Little Pony fan I say, bring on the pony love!
Posted by Summer at 9:21 AM 1 comment:


According to My Little Pony on Facebook this new billboard will be unveiled in Los Angeles tomorrow to promote FIM on the Hub.

I think it is hysterical that all of the ponies are posed yet Pinkie Pie looks completely clueless with a smile plastered on her face. I have to say that Friendship is magic has definitely made me appreciate Pinkie Pie as a character.
Posted by Summer at 8:17 AM No comments:

Erika Walton who is the designer of Alter Ego pays homage to nostalgic characters including superheros, Looney Toons, and My Little Pony by incorporating them in her fun and funky jewelry designs. Her pieces may be loud and flashy, but deep down you have to admit that given the right occasion (The My Little Pony Fair and Convention) you know you'd love to flaunt one of her designs around your neck. It would definitely garner some attention from other fans!
I think Erika needs to show off her designs at The My Little Pony Fair. I want to see these crazy pieces in person.
Visit Alter Ego and see all of her pony designs.
Posted by Summer at 6:06 PM 2 comments:

WeLoveFine.com is hosting a shirt design contest for pony fans. They recently acquired My Little Pony as a license and have begun posting shirts on their website (pony shirts). Submissions can use either stock art or draw your own. The contest winner will receive a $200 WeLoveFine store credit and four runners up will receive a $25 store credit. I'm anxious to see the winning designs! Derpy Hooves anyone?
Below you'll find all the contest submission details as posted on WeLoveFine.com. Happy designing!
"To celebrate the launch of our new My Little Pony line, we are offering our design-savvy customers as well as MLP fans across the web the chance to submit a design, and you could win up to $200 in FREE TEES!


In addition, all prize winners will have a chance of Mighty Fine purchasing your style outright for sale in our shop, on top of your prize credit. Artwork is due by Friday, July 1. Our customers will vote on the submissions on our website from Tuesday, July 5 through Friday, July 8.


Send your designs to: contest@mightyfineinc.com


Submission emails require: Your image, a title for your design, your full name and your preferred email address.


The My Little Pony Fair has had a banner year for ticket sales. While this is very exciting and means there will be plenty of pony fans in attendance, it also means that the events scheduled for Friday such as the Hasbro Tour and The My Little Obsession movie premiere are at capacity. Adult and child general admission tickets are still available through our eventbrite ticketing system for the main day of the Fair on Saturday. Online ticket sales will end on Friday July 1st. Visit www.mylittleponycon.com for details.
Posted by Summer at 12:13 PM No comments:

The other day while I was in Target, I spotted this...


A Pinkie Pie bubble machine complete with My Little Pony bubble solution! I haven't found anything new in my area for awhile so I happily added her to my cart to fulfill my pony fix. Plus, I rationalized to myself that my 5 and a half month old would love the bubbles. When we got home, I rushed outside with my husband carrying the baby, to try out Pinkie.  I pulled the trigger on her tail which raises her head up and bubbles came spewing out of her mouth. I found this very amusing since it reminded me of those cartoons where the character swallows a bar of soap, and if a pony was going to swallow a bar of soap, it would be Pinkie Pie.

While I delighted in the bubbles coming out of Pinkie Pie's Pie Hole, London was not impressed.

Let this be a lesson: My Little Pony purchases can not be rationalized no matter how hard I try.
Posted by Summer at 11:35 AM No comments:


The Designers at Hasbro are offering a seminar for MLP Fair Attendees!


Hasbro Designers’ Seminar
Time: Saturday 10-11
Limit 50 people
Description: "This will be a seminar walking through the process of how we developed the latest MLP look both from a 3D toy perspective and an entertainment perspective."
The Fair staff is working out the details on how to handle sign-ups for this event as it is bound to be popular! We will most likely be doing a lottery system.
Stay tuned to find out how you can have a chance to attend!
Posted by Summer at 10:18 AM No comments:

My Little Pony Fair Schedule and Games and Activities are Posted!

I've updated the My Little Pony Fair Convention website with the Schedule of Events. Also, the Game and Activity page has been updated with 2011 information. Check it out!

I'm pleased to announce that ALL vendor booth space has been sold so there will be plenty of shopping opportunities for Fair Goers. I can't wait to see what is for sale!

Posted by Summer at 5:47 PM No comments:

Contest: Prove your knowledge of My Little Pony G3 and win a 2010 Comic Con Exclusive!

In addition to offering mega deals, www.mylittleponycollecting.com is also running a fun contest. Identify the ponies pictured in the calender picture for a chance to win a MIB 2010 Comic Con Exclusive Pony.

To enter the contest, go to http://mylittleponycollecting.com/contest-prove-your-knowledge-of-my-little-pony-g3-and-win-a-2010-comic-con-exclusive-mlp/ . 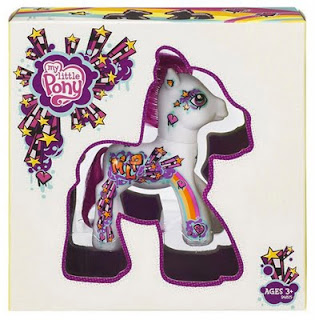 Posted by Summer at 4:08 PM No comments: 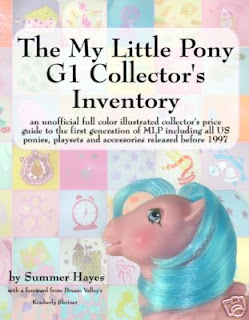 If you still need one of the four My Little Pony Collector Inventory Guide books and are wanting to score an awesome deal, head on over to www.mylittleponycollecting.com ! They are offering an amazing sale on all four guides to their readers. Visit this link for details : http://mylittleponycollecting.com/whats-the-deal-with-the-super-secret-my-little-pony-guide-sale/

I can assure you that you will not find a better price on these books anywhere. The deal only runs through July 1st.
Posted by Summer at 3:57 PM No comments:

Premiering July 8th as part of the My Little Pony Fair Convention festivities, My Little Obsession is a feature length documentary centered around My Little Pony and the people who collect them. Check out the film trailer. I had the honor to be interviewed for Julie's film and am so excited to see the finished product!

The film's director, Julie (also known as MustBeJewel), wrote the following to describe her film:

"In 1980, the My Little Pony line of toy figures and merchandise was created by a New England woman named Bonnie Zacharie. Little did she know that with her simple idea, she would create a legacy that would last well into the twenty-first century.
The funny thing about My Little Pony collectors is that they cannot easily be picked out of a crowd. They are students, lawyers, nurses, taxidermists, Broadway actors, teachers, and florists. Most of them conduct their lives just like anyone else, with the same mundane day-to-day obligations that everyone has to face. Yet these same people have hundreds or even thousands of these small plastic ponies displayed or stored in their homes, with values that would blow your mind.
We will meet people who have enormous collections, some with whole rooms of their houses devoted to displaying their collections. Some were parents or children in the 80's, and some are children growing up with the newest generation of My Little Pony. And on this eccentric and upbeat journey, we will celebrate a nearly 3-year legacy, and find out just what it means to be a My Little Pony collector."
Posted by Summer at 6:58 PM 1 comment:

So the school year is officially over and instead of teaching second graders, I can now focus on the last few details of this year's My Little Pony Fair and Convention (more info can be found at www.mylittleponycon.com in case you've been living under a pony-free rock for the past few months).

I'll be posting a slew of updates in the coming days including contests, awesome mega deal codes for The My Little Pony Collector Inventory books, details about the premiere of the film, My Little Obsession, and oh so much more.
Posted by Summer at 6:42 PM No comments:

Lucy Sawdon is running some auctions currently on Ebay of celebrity signed My Little Ponies. All proceeds will go to the Lymphoma Association and since I'm all about a good cause and this is pony related, I'm promoting her efforts. 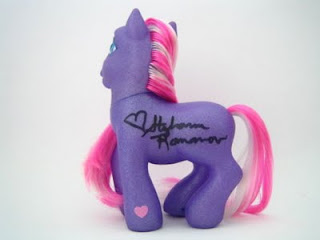 Lucy's auctions can be found HERE.

When patients learn they have lymphatic cancer, whether this is Hodgkin or non-Hodgkin lymphoma, they often know little about it. In these circumstances, it is natural to feel fear or anxiety. However, the Lymphoma Association believes that knowledge conquers fear, so continually works to provide accurate medical information and emotional support to anyone affected by lymphoma.