Free MLP (or other Hasbro toy) with $20 purchase!

SpottedSlug posted about a promotion that Hasbro is running through December 25th 2010 and January 31st 2011. Basically you buy a Hasbro toy or game, fill in a form and send it in with your original receipt and they'll send you a free toy. The form lets you pick your top three toy lines and Hasbro will send you a toy from one of the lines you choose.

I wonder what they'll be sending out as their free products. Hopefully, the stores around me will actually stock some new products so I can make a purchase and fill out my own redemption form to find out.

Here is the link for the redemption form and if you send one in let me know what they send you!
http://www.hasbro.com/shop/SuperChargeRedemptionForm.pdf
Posted by Summer at 10:55 AM No comments:

I am pleased to announce that the 2011 My Little Pony Fair and Collector's Convention will take place on July 8th-9th* at Hasbro's Headquarters in Rhode Island. Additional information will be released in the coming weeks!

*Please note that the date has been changed to July 8th-9th and is no longer July 22nd-23rd.
Posted by Summer at 12:57 PM No comments:

Okay, while these are not an officially licensed My Little Pony product, they are awesome! I'm thinking they would make great summertime shoes for hanging out at the lake, beach, or a pony event (like My Little Pony Fair 2011).

I love how they name the shoe styles not by the pony name (since they are obviously skirting around copyrights) and instead name them by pony characteristics. For example, the "Dashing in the Clouds" shoe is obviously designed after Rainbow Dash, "Fresh Picked Apples" is designed after Applejack, etc.

They are being sold for $65 and I love them. I only wish I had discovered them before I made my Christmas list!

Check out all the styles available HERE on zazzle.com
Posted by Summer at 6:32 PM No comments:

A few years ago my friend, Mary, and I went to see the My Little Pony Live stage show. We had a great time despite the fact that we were quite possibly the only attendees that did not have a child under the age of 6 in tow.

The other day, I found myself randomly wondering what happened to the costumes used in the show. I know Hasbro has the giant Pinkie Pie costume in house because they brought it out at both the 2008 and 2009 My Little Pony Fairs for photo opportunities. The funny thing about the Pinkie costume is that the back legs used to "float" behind the pony but when I last saw it in 2009 they had attached wheels to the back legs since they had started to sag and drag behind.

So, we know what happened to Pinkie, but what about Thistle Whistle? Where the heck did Rarity and Minty go? Are they sitting in some warehouse or someone's basement somewhere, or were they sold off after the MLP Live show ended? I think they are adorable and it is a shame that they have simply vanished.

For those who may have completely missed out on My Little Pony Live and have no idea what I'm talking about, or those who want to relive the stage show it is available on DVD.

Posted by Summer at 1:07 PM No comments:

I still haven't found any of the new Friendship is Magic products in my area aside from the promotional gift pack. I may have to put in an order online for the new Fashion Style Applejack and Rarity. They're much larger than the regular sized figures, but since I'm in love with all versions of Applejack, I'm sure I'll at the very least add her to my collection.

It is hard to believe that it is already December and Christmas is just a few short weeks away. We finally had some cold weather and some snow so at least it feels a bit more wintry than the bizarre 70 degree weather we had in November. Normally, I'm on the ball with my Christmas shopping and holiday decorating, but this year I'm behind schedule.

My husband and I already have two of our Christmas trees up (one with our Hallmark ornaments and the other filled with his Star Wars ornaments) and I'm planning on putting up a third tree this week filled with my collection of My Little Pony ornaments. I have the purple licenced My Little Pony Christmas tree, but I'm thinking that I may have to spring for a bigger tree to fit all of the pony ornaments. If you happen to know of a place that sells a purple or pink pre-lit tree that stands around 4ft. let me know.

I recently picked up this new style Pinkie Pie ornament at Target and I missed out on this Sweetie Belle ornament by Kurt Adler in stores but recently bought one on Ebay. 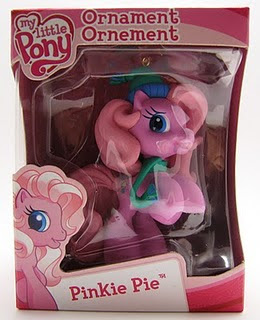 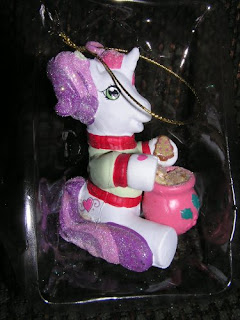 I also picked up some adorable pony wrapping paper at Toys R Us and you can be sure that everyone on my gift list will be receiving their gifts wrapped in festive holiday pony print regardless of age and gender. :)

Happy Holidays!
Posted by Summer at 4:51 PM No comments: