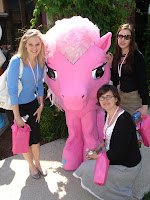 I've officially returned from my trip to the 2008 My Little Pony Fair Collector's Convention. It was a terrific event with top-notch speakers and sneak peaks at upcoming products. While I enjoyed every minute of the convention, I have to say my favorite part was the Hasbro tour. In addition to hearing Bonnie Zacherle recount the beginnings of My Little Pony, we were treated to presentations by the marketing, licensing, and product design departments. No pictures were allowed inside the research and development department, but I did catch some gorgeous design drawings of a future art pony on the wall of a cubicle! I hope that one makes it to the shelves! At the end of the tour each attendee was given a pink (of course!) bag with one of the new core 7 ponies and a special 25th anniversary silver pin. While we waited for the buses to arrive to take us back to the convention center, we were greeted by Pinkie Pie from the MLP Live stage show.

Be sure to check back soon for video footage!
Posted by Summer at 2:13 PM No comments: 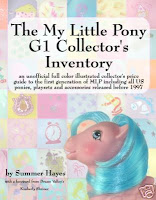 Priced Nostalgia launched the Pony Symbol Contest last weekend at the My Little Pony Fair in Providence, Rhode Island. If you didn't have a chance to enter at the event, you can fill out an online entry form by going to this link. The contest is very easy to enter, especially is you have your copy of my book, The My Little Pony G1 Collector's Inventory handy. Participants must list the names of the 49 ponies whose symbols appear on the book cover. The contest runs throughout the summer and ends September 30th.
Posted by Summer at 8:24 AM No comments:

I'm currently finishing up some last minute packing for my trip to Providence, Rhode Island for MLPFair 2008. If you happen to be attending, make sure to stop by my booth and introduce yourself. I'd love to meet you! In addition to chatting about ponies I'll also be signing copies of my books. I'll have copies for sale or if you already purchased your copy and would like it signed, bring it along and I'll be glad to sign it for you.

Priced Nostalgia Press will also be having their own booth this year and will be launching a special contest for a chance to win an Ebay gift card! They will also unveil the cover art for my upcoming My Little Pony G2 Collector's Inventory book. This year's Fair promises to be the best yet with a panel from Hasbro's marketing and design departments and a special appearance by My Little Pony creator Bonnie Zacherle.

Hopefully I'll see you in Providence!
Posted by Summer at 10:07 AM No comments:

Awhile ago, I posted the pictures that had been released of the 2008 MLP Fair Exclusive pony. However, I totally neglected to blog about the UK/German Convention exclusive. Apparently, both the German MLP Convention and the UK MLP convention (PonyCon)have been promised the same exclusive. Still, that doesn't take anything away from this truly unique pony. I mean, yellow and black? This is truly new territory for the MLP line. Vanilla on the MLPArena posted this picture of the upcoming convention exclusive and offered a handful of collectors who are not attending the German Con the opportunity to purchase her on a first come first serve basis. (Thanks Vanilla!) 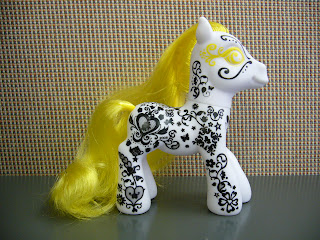 Hasbro to Offer Tour at MLPFair 2008!

Despite being insanely busy, I had to take the time to blog about the fact that Hasbro is offering a tour of its facilities the Friday before the 2008 MLPFair at 9:30 a.m. for collectors. However, in order to attend the tour, you have to go to http://www.mlpfair.com/ to register. Registration is free, but the tour is limited to only 100 participants. So if you'll be in Providence early Friday, make sure you sign up soon before all the slots are filled.
Posted by Summer at 7:46 PM No comments: