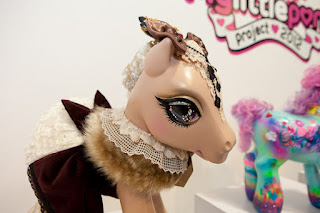 On Saturday night, the My Little Pony Project L.A. held its opening night at the Toy Art Gallery. We Love Fine hosted a live video feed from the event and I tuned in for a few minutes to watch people wave their arms and jump up and down in front of the camera obnoxiously, before deciding that I'd be much better served checking out the photos later (sans crazies). LA Weekly posted a great slide show of the event and I find it interesting that it highlights the artwork and the female fans almost exclusively. I'm sure that there were plenty of Bronies in attendance (I know I saw a few act a fool on the live feed), but from the photos you wouldn't know they were a presence. I guess I don't blame LA Weekly, girls typically look a lot better in rainbow wigs and glitter than most men! 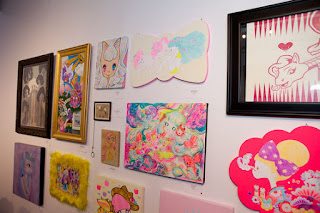