Tickets for the 2010 My Little Pony Fair are now available!

Rates are as follows:

Additional booth space can be purchased for $20.00.
Posted by Summer at 4:52 AM No comments:

The New G3 Take on SeaPonies

In light of my recent post about my ho-hum feelings about the current G3 line, I feel obligated to comment on this: 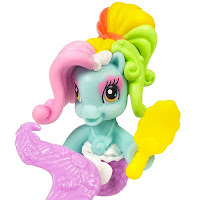 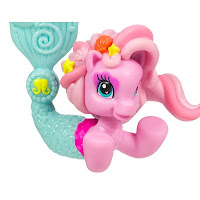 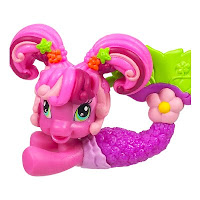 It seems that Hasbro is introducing the G3 interpretation of SeaPonies. It certainly grabbed my attention. My response was first disgust, then surprise, and finally I couldn't stop laughing.

I love how the background story reads: Whenever the ponies visit the sea, they magically become beautiful mermaids! Join them as they have waves of fun discovering a brand new world!

It's like they inserted My Little Pony in the 80's flick
Splash.

Yeah, I totally need these. They are too bizarre and ridiculous to resist.
Posted by Summer at 4:38 PM No comments:

I’m excited to announce the date and location of this year’s seventh annual My Little Pony Fair and Convention!

The 2010 MLP Fair will take place July 17th and 18th at the Galt House Hotel in Louisville, Kentucky.

Home of the Kentucky Derby, Louisville offers a central location for those driving and a major airport. Driving times from several major cities can be found here.

The Galt House Hotel is located in the heart of downtown Louisville on the riverfront within walking distance to multiple restaurants, museums, and nightlife entertainment including Fourth Street Live, Waterfront Park, and Slugger Field. The Galt House offers a direct shuttle to and from the Louisville International Airport. The convention will take place in the Galt House’s newly renovated ballroom with over 13,000 square ft. of space. The Fair has a discounted room block reserved for MLP Fair and Convention guests at the hotel. Details about reserving rooms in the block will be posted soon, as the hotel is still processing the request.

This year promises to be an exciting event collectors won’t want to miss!

If you have any questions, please feel free to email me at summer@purplepajamapress.com or post them in this thread (my PM box is a little crowded at the moment) and I will try my best to answer them.

Summer
Posted by Summer at 3:02 PM No comments:

My Thoughts on the Current Direction of My Little Pony 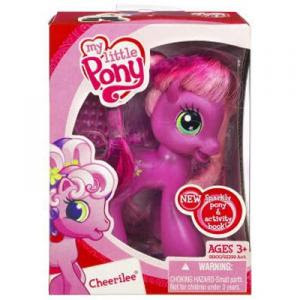 It has been interesting to see the progression of the My Little Pony line over the past two years. New characters have become nonexistent (unless you take into account the Collector Art Pony line and the two mommy and baby sets that have popped up recently). Hasbro seems very committed to the Core 7 theme (much to the dismay of many collectors) and even after they reinvented the body style last summer, the same seven characters continue to represent the My Little Pony brand. Character recognition seems to be a driving force in the line which I suppose is necessary since the target market is 3 to 5 year old girls. Still, I would think that Hasbro would want to extend their target market age to those same girls as they get older by offering products that could maintain interest and engage 6,7, and 8 year olds. However, instead of sticking with ponies, the girls commonly move onto Littlest Petshop (another Hasbro brand). I get that My Little Pony is currently a brand that is geared toward the Preschool and Kindergarten set. I accept it. I still collect them because I love My Little Pony; but I have to admit that collecting the newest reincarnation of My Little Pony seems a little more like going through the motions and I don't get nearly the same amount of enjoyment out of them.
Posted by Summer at 10:04 AM 1 comment: 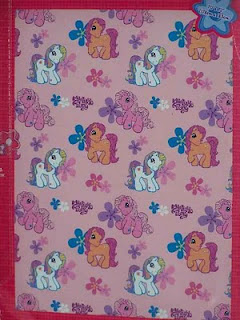 Last weekend I responded to a post on Craig's List that my mom came across for a new My Little Pony shower curtain with shower hooks, bath mat, and trash can. I remembered seeing these items in stores a few years back and resisted the urge to buy them because I had pretty much stopped buying G3 merchandise and had no use for a pony-themed bathroom (We had a very strict ponies-stay-in-the-ponyroom rule at my house). However, since I've never bought or sold anything on Craig's List before and was intrigued and as all rules have gone to the wayside while I'm residing in a rental, I replied to the posting.

On Saturday afternoon I convinced my husband to come along on another pony misadventure. Aside from a few complaints as we drove through the snow covered side streets of a shady neighborhood, he was a good sport about the whole thing. We arrived at the woman's house and were greeted by an overweight man in a torn T-shirt who proceeded to usher us inside and then immediately sprawled out on the couch to return to his bass fishing TV programming. The living room was packed full of random toys, clothes, shopping bags, and empty mailing boxes. Every surface was covered in knickknacks. I felt like I'd seen this living room on that A&E show, Hoarders.

The woman came into the living room wearing her nightgown and mumbled something about time getting away from her. -Did I mention it was already three o'clock in the afternoon?- She then shuffled off to gather the items from a back room somewhere and didn't come back for nearly ten minutes. Meanwhile, we stood there and made small talk about giant fish with the guy on the couch.

Overall, it was a really odd experience. While Craig's List does have the advantage of avoiding shipping prices and seeing items in person before purchasing, I still prefer buying on Ebay or from other collectors. I think that in most cases, saving a few dollars is not worth the awkwardness.
Posted by Summer at 7:40 AM No comments:

I have had ponies on my mind this past week as I've been working on the last little bits and pieces needed to wrap up The My Little Pony G2 Collector's Inventory. I've gotten some cute, interesting, and downright strange G2 merchandise photos sent to me from collectors and have been working on getting them ready for the book over the weekend. In addition to book things I'm also working on a major pony undertaking (TBA when all the details are finalized). I need more hours in the day!
Posted by Summer at 5:25 PM 2 comments:

The 5 Stages of Toy Collecting

Today, I stumbled upon Juliana Heng's website about toy collecting (she collects MLP among other toy lines and posts tips and tricks of the trade for collectors). She has penned a terrific collection of posts that outline the 5 stages of toy collecting. I found Juliana's insight and opinions on this matter right on target. Plus, it was fun to think back on my years as a MLP collector and reminice as I remembered myself going through each stage.

She divides the stages into the following and includes a detailed description of tendencies found in each stage:
1.The newbie stage
2.The rapid growth stage
3.The nirvana stage
4.The guru stage
5. The casual stage

This girl really has toy collecting down to a science with tips on everything from storage, to cleaning, to toy funds management. If you get a chance, you should visit her website!
Posted by Summer at 7:39 AM No comments:

Baby It's Cold Outside! 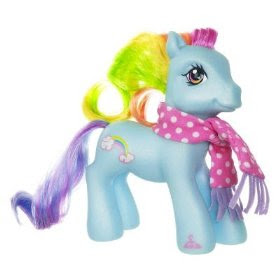 I'm on my second Snow Day! I must admit it is nice to only have a three day work week (even if I have to make up the days at a later date). Who wants to trudge through the snow anyway? Not me!

I am working on tying up the last few loose end on the G2 book after an extended hiatus and it's really nice to have something to take my focus off of the chaos of life. I'm waiting for the last few photos to roll in and writing up the photo credits and adding little things here and there.

I'm still house hunting and so far have not found anything that is absolutely exactly what I want so I'm still shacked up in a rental. The worst part of this whole ordeal is that I moved in the middle of the summer and really didn't have the foresight to bring all of my winter coats, boots, mittens, hats, and scarves with me. Who thinks about freezing temperatures when you're packing in July?
Posted by Summer at 5:43 AM No comments: 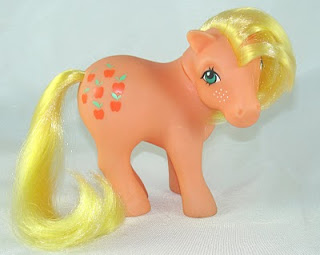 I don't typically remember my dreams, but had a pony-themed dream last night that was so ridiculous I have to share.

I go into a toy store and find G3 My Little Ponies that are packaged with alternant accessories and I feel frustrated that I already have all of these ponies, but still feel like I have to purchase them since the accessories are different. As I am pulling ponies from the shelves and placing them in my shopping cart, I notice that a carded G1 Applejack is also on the shelf and quickly grab her. Suddenly, the bottom shelf is full of G1 boxed and carded ponies and I start snatching them up. I turn around to a store employee who happens to have a scanner in her hand and ask her to price check one of the G1 ponies for me (apparently even in my sleep I am financially conscious). The pony rings up for $9.99 and upon hearing this I quickly turn back to the shelf and frantically begin snatching all the G1 ponies up and throwing them into my cart. Suddenly another woman walks up to the shelf and exclaims "They have the older ponies!" Upon hearing this I literally throw my body on top of the remaining ponies on the shelf to shield them from her, but the woman reaches under me and manages to pull a boxed Morning Glory Flutter pony from under me. I can't believe that she managed to grab this pony and am absolutely furious at her as I look into my overflowing cart of ponies that includes a boxed Cloud Puff Flutter Pony and a Lily Flutter Pony. Still, I'm dissapointed because one got away.
Posted by Summer at 5:03 PM No comments:

Email ThisBlogThis!Share to TwitterShare to FacebookShare to Pinterest
Labels: My Little Pony dreams 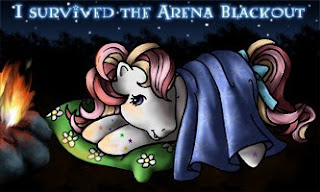 The Arena blackout is over! After days of being down, the MLPArena message board is up and running again. They are hosting some awesome free raffles to celebrate so go check it out. They are also offering the above signature pic made by the lovely Sourdoughstomper and dreamed up by Diamond. I know there were quite a few displaced collectors scrambling to other outlets (including the wonderful MLPTP message boards) to get their pony fix. Welcome back MLPArena!
Posted by Summer at 6:42 AM No comments:

Happy New Year! If one of your New Year's Resolutions for 2010 is to get organized and that involves inventorying your My Little Pony collection (using The My Little Pony Collector's Inventory series books- of course) you might also want to consider taking the time to insure your collection. The best option that I found is getting a policy through Collectibles Insurance Services, LLC. They recommend maintaining an Inventory of items to expedite claims in the event of a loss, so pull out your MLP Collector's Inventory books and get to work!
Posted by Summer at 5:37 PM 1 comment: