If you happen to be located in the Midwest and want to get together with fellow collectors to buy, sell, trade, and discuss ponies you're in luck! The Cincy MLP Collectors are holding the 3rd annual Cincinnati Pony Meet on Saturday August 1st. Details can be found on their official message board or you can follow the updates on this MLPArena thread.

I know several of the girls who are planning the event and they are really great! At the moment I'm tentatively planning on attending and will be bringing book copies to sign and sell for anyone who might be interested.
Posted by Summer at 9:52 AM No comments: 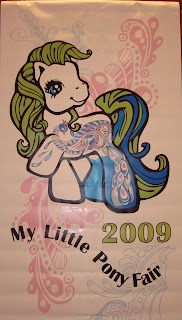 I had a terrific time at the 2009 My Little Pony Collector's Convention in Las Vegas. Thanks so much to everyone who stopped by and introduced themselves to me at my booth, purchased a book, or shared their thoughts about the My Little Pony Inventory Collector's Inventory series. You all are awesome! I met some really great people including Pandorarose who runs the My Little Pony Talk weekly radio program, and some adorable little girls who were so excited to get their copies of my books signed that they were jumping up and down. Plus it was great spending time with some longtime friends. Going to these events year after year starts to feel a little like going away to summer camp.

I took plenty of photos for the scrapbook, bought an entire set of Mountain Boy Ponies from Ashlyne, picked up the gorgeous Peacock Art Pony exclusive, won a giant blank Pony Project Pony in the MLPFair raffle, and scored some freebies from both the MLPTP and MLPArena booths. If you get a chance to attend The My Little Pony Fair Collector's Convention in 2010 you should definitely go!
Posted by Summer at 11:38 AM 1 comment: