In addition to My Little Pony's new look, it appears that Hasbro will also be revamping the brand's logo. It isn't too much of a change, but it is different. If you'd like to weigh in on the logo change you can check out this conversation on the My Little Pony Trading Post started by SoSoftClair.
Posted by Summer at 7:23 AM No comments:

While I despise winter and cold weather, there is something to be said for a "snow day". The weather here is a mix of rain and ice and I'm happy to be warm and stuck at home with my laptop. I'm taking a short break from pouring over the new proof for The 2007-2008 My Little Pony Collector's Inventory because blogging about the 2009 France Toy Show just can't wait! Magicfeuilledethé, a new member of the MLPArena, posted some interesting photos from the event.

Remember this poster that was leaked by an artist that was contracted by Hasbro last year? 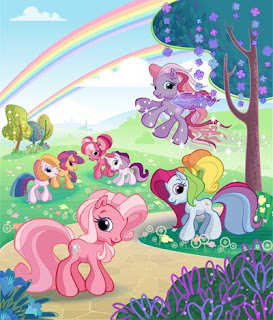 See how Cheerilee's hair is all crazy pigtails and the ponies' bodies are all squished and their heads are gigantic and their eyes are enormous? Initially, collectors assumed that this would be a new direction for the Ponyville line. However, after seeing this photo it seems that this is what is in store for the regular G3 line: 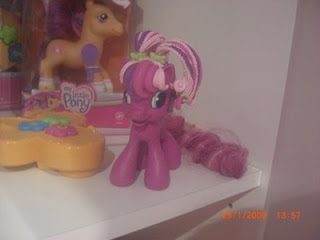 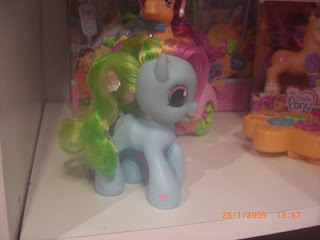 In addition to these photos of displayed products, Magicfeuilledethé, also managed to take photos of the 2009 product catalogue. Here are a few highlights.
More photos of the new 2009 designs: 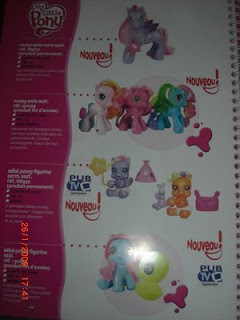 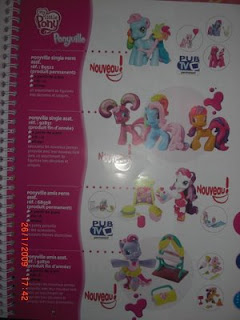 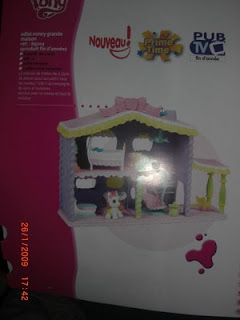 To see all the the photos and read what collectors have to say about these new designs, click here to follow the discussion on the MLPArena.
Posted by Summer at 8:36 AM No comments:

If you are wanting to attend a My Little Pony Collector event and can't quite swing the My Little Pony Fair in Vegas this year, east coasters do have a few options that are closer to home.

The Maryland Pony Meet will take place on May 16th in Baltimore, MD. This event is hosted by MustBeJewel and has attendees from as far away as Michigan and New York. Guests buy, sell, and trade MLPs as well as take part in a slew of organized games and contests. A live auctioneer is also present for the annual live auction. For more information, participants can visit the Maryland Pony Meet Page.

The Virginia Pony Meet will take place on August 22nd in Charlottesville, VA. This event is hosted by several Virginia collectors and headed up by SailorLibra. While this event is on a much smaller scale, it promises to be a great opportunity to meet fellow My Little Pony enthusiasts. This type of gathering is specially good for first time Pony Meet attendees. For more information, please contact SailorLibra through the MLPArena.

I'll be at the Maryland meet this year enjoying the festivities and signing copies of my books. I attended the event in both 2007 and 2008 and had a great time. Jewel is an amazing hostess and throws one heck of a pony meet! I'll also be attending the Virginia Pony Meet this year for the first time and will be doing a signing there as well.
Posted by Summer at 9:18 AM No comments:

I wanted to give a shout out to Starfaerie and greywolf1978 for sending me two missing G3 photos to use in the G3 update guide. Thank you both so much!
Posted by Summer at 5:46 PM No comments: 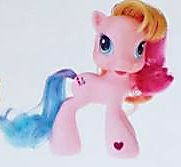 Scans from a 2009 Toy Fair preview guide have surfaced online and its discovery brings with it mixed reactions from My Little Pony collectors. The article states that both Strawberry Shortcake and My Little Pony will have "strong reinventions".

The preview guide article states:
"My Little Pony will also be getting an update and the introduction of a new range, the Newborn Cuties, which are a similar version of the popular Newborn range. The main figures are set to be more distinctive, with slimmer frames, larger eyes and more defined feet. For the second half of the year the whole range will be brought together with a new packaging style."

While the majority of collectors seem to be dissatisfied with this this new direction, there are a handful that remain optimistic. Time will tell if this is, in fact, the right move for My Little Pony.

Bee-Chan (a member of the MLP collector forum, www.MLPArena.com) attempted to make sense of the radical changes in store for the My Little Pony line. She posted the following to a forum discussion:

"Hasbro is doing what they think they must in order to just stay a-float. They are a business, they make what they know is going to sell. Who says they have to listen to the collectors, who are a very small portion of their income.I'm not saying we have to LIKE what Hasbro is putting out, but understand that they are a BUSINESS, they have to cater to their target audience, and as much as we might like to think we are, we are NOT that target audience. If they only targeted us, they'd be out of business in a heartbeat, because let's face it, we're still a SMALL fandom."

With several collectors vowing to boycott future My Little Pony purchases, emotions are high and discussion is lengthy about the proposed changes.

In case you are curious, I haven't taken a side on this issue at present. I'm sure I'll have plenty to say in the future, but right now I'm trying to let everything sink in.
Posted by Summer at 9:21 AM No comments:

If anyone has the Patchwork Rainbow Dash plush (preferably new in box) and is able and willing to take a high quality photo of her against a white background, I'll send you a free pony and credit you in the new G3 update guide.

I was sure that I owned her, and that she had already been photographed. However, now that I'm looking at proof files, it seems I'm going crazy as I can't find the photo or the plush anywhere.

I guess when you get too many ponies, they all start to blur together.
Posted by Summer at 1:57 PM No comments: 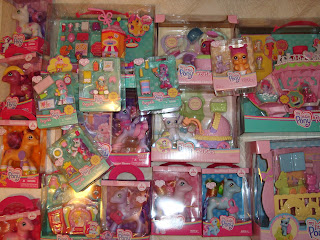 It's funny that just yesterday I was complaining to Matt about not finding anything new. Obviously, the pony flood gates were opened!

Have I mentioned I adore the Newborn Cuties?
Posted by Summer at 4:43 PM 1 comment:

Back in the Swing of Things

Now that I've readjusted to "normal" life, I'm able to focus all those little things that got pushed aside over the last two months. This includes proofing the new MLP guides and getting organized. Seriously, you should see my office, it is a disaster area with piles of papers waiting to be filed, and an actual blanket of dust coating the entire workspace. Shameful.

In other words, two new MLP guides will be coming your way very soon, so check back for updates!
Posted by Summer at 5:52 PM No comments:

Mark your calenders! The MLP Fair staff announced June 20th and 21st as the dates for this year's My Little Pony Collector's Convention to be held in Las Vegas, Nevada. Additional information can be found of their official website: www.mlpfair.com
Posted by Summer at 7:45 PM No comments:

Happy New Year! I'm back from my lovely Caribbean vacation, and was greeted with chilly temperatures and wind upon my return. A little sun, 80 degree temperatures, and ocean breezes proved to be the perfect way to spend the holidays. At present, I'm unpacking and attempting to get my house back in order before I return to work on Monday.

I was on Internet hiatus during vacation, but luckily I didn't miss too much in the way of MLP news during my break. I managed to pick up the new Scootaloo with her tricycle at a Target and I think she's hysterical. I mean, she can't possibly peddle!

By the way, if you are a dog lover (like me). I totally recommend reading Marley & Me and then going to see the film in theaters. I picked up the book for some beach reading and I couldn't put it down. John Grogan captured raising a Labrador Retriever perfectly and I found myself laughing out loud. The film is a fairly good adaptation of the book and is both hysterical and heartwarming.

Apologies for the lack of Pony-related posts lately, but I have been on a bit of a pony break aside from the occasional G3 purchase. Don't despair, I'm sure when the new G3 guide becomes available and the G2 book is published it will renew my interest, but for now I'm enjoying other interests.
Posted by Summer at 10:44 AM No comments: